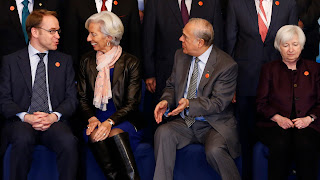 International Monetary Fund officials discussed the possibility of putting pressure on German Chancellor Angela Merkel to give Greece debt relief, or the IMF would withdraw from the country’s bailout program, according to a transcript of a purported conversation published by WikiLeaks.

Three officials said the refugee crisis, the U.K. “Brexit” referendum and Greece’s July deadline to repay about 2.3 billion euros ($2.6 billion) in principal on Greek bonds held by the European Central Bank were key events that could bring the issue to a head, according to the transcript on the WikiLeaks website. When asked about the account, an IMF spokesperson in an e-mail said the fund never discusses leaks or supposed reports of internal discussions.

The purported conversation underscores tensions that still divide Greece’s creditors after six years and three financial bailouts. IMF has been at loggerheads with auditors from the European Commission over the fiscal measures that the continent’s most indebted state must implement in order to meet its agreed budget targets, while Germany and other euro area countries have been insisting that the Fund will eventually have to get on board for the bailout to proceed.