Greece, Germany, IMF: Someone Has To Blink (The Short Answer) 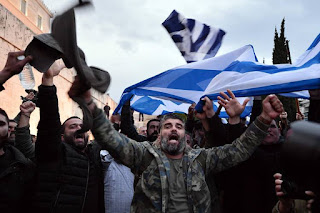 The Greek bailout saga has entered another one of those tense periods when the whole deal could fall apart. A compromise is needed. But it isn’t clear how to keep key creditors on board without testing Greece’s brittle politics to breaking point.

Exactly six years have passed since the first Greek bailout. Europe has kept deferring the hardest questions: Is Greece solvent? Is austerity alone a realistic fix, economically or politically? Do Germany & co. need to relieve Greece’s debts? Those issues have come back to haunt Europe, just as it’s suffering headaches over migration and Brexit. A breakthrough in May has become vital for avoiding another big Greek panic this summer.

Q: It's déjà vu all over again! What's the latest fight about?

A: The International Monetary Fund has lost patience with the strained math of the Greek bailout plan. It is refusing to lend Greece any more money, unless either the country enacts extra austerity to guarantee a high budget surplus, or eurozone countries led by Germany write down a lot of what Greece owes them.