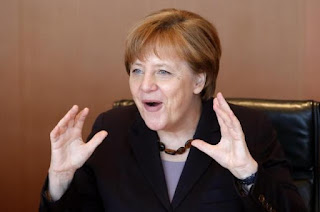 Chancellor Angela Merkel said on Tuesday that a debt haircut for Greece was not possible so long it remains in the euro zone, adding that Germany wanted a quick conclusion of a bailout review.

Merkel spoke after meeting IMF chief Christine Lagarde. The IMF has fought shy of participating in the bailout without a firm promise of debt relief for Greece from the EU.

Germany, while keen for the IMF to take part, has said relief cannot be discussed until Athens has demonstrated compliance with the terms of the bailout.

"It is not a demand of the federal government to have no debt haircut but rather in our opinion this is legally not possible in the euro zone," Merkel told reporters in Berlin after meeting International Monetary Fund head Christine Lagarde and other global economic leaders.

"The German position is that the IMF takes part in an agreement ... We want a quick conclusion of these talks," Merkel added.