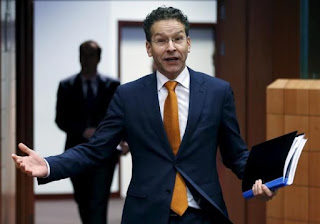 There will be no breakthrough on unlocking new loans for Greece in Washington this week, but euro zone ministers will seek a deal next week in Amsterdam that could pave the way for debt relief talks, a top euro zone official said on Thursday.

"In Amsterdam we will have more time, everyone around the table and try to really get somewhere," the chairman of euro zone finance ministers, Jeroen Dijsselbloem, told reporters on the sidelines of International Monetary Fund and World Bank meetings in Washington.

He said euro zone lenders were adamant that the key to a deal was sticking to the assumption that Greece's government had to reach a 3.5 percent of GDP primary surplus in 2018.

"I don't see any flexibility on the 3.5 percent in 2018 because it was one of the anchors of the agreement of last summer. So that's going to take a huge effort on the part of Greece but I think it can be done," Dijsselbloem said.