They waved, cheered and smiled, elated to have made it to Europe at dawn on Sunday in a packed blue rubber motor boat.

The 50 or so refugees and migrants were among the first to arrive on the Greek island of Lesbos on day one of an EU deal with Turkey designed to close the route by which a million people crossed the Aegean Sea to Greece in 2015.

Exhausted but relieved, the new arrivals wrapped their wet feet in thermal blankets as volunteers handed out dry clothes and supplies.

Reuters witnesses saw three boats arrive within an hour in darkness in the early hours of Sunday. Two men were pulled out unconscious from one of the boats amid the screams of fellow passengers and were later pronounced dead.

More
Posted by Yulie Foka-Kavalieraki at 11:17 AM 0 comments

On the front line: Greece’s biggest banks may appear to be out of danger, but they are not 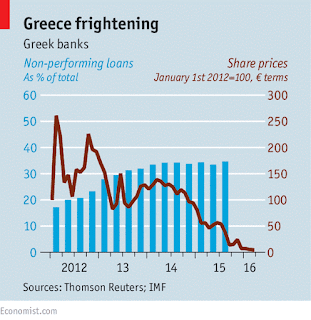 On the face of things, Greece’s four big banks are in their best shape in years. In November they received their third bail-out in as many years. The extra €14.4 billion ($15.9 billion) they got then (some of it from private investors) raised their capital ratios to 18%, well above the European average of 13%. Recent legal changes make it easier for them to repossess collateral and to sell loans to third parties. Better yet, recent data suggest the economy shrank by only 0.2% last year, much less than initially feared. The Bank of Greece predicts that growth could return as early as this summer. After eight years of crisis and recession, normality at last seems within reach.

But beneath the cushion of fresh capital, cracks remain. Greek banks are still losing money. Piraeus Bank, the country’s second-largest lender, this week reported a net loss of €1.9 billion in 2015. Deposits have barely begun to grow again after last year’s run; the capital controls it prompted remain in place. Fully 40% of loans and 55% of mortgages are not being paid down, compared with a European average of 5%. Big losses on non-performing loans (NPLs) and debt securities could erode the banks’ capital once again. Greece is rowing with the other members of the euro zone about the conditions of its bail-out, raising the spectre of another crisis. A fourth recapitalisation is not out of the question, says Josu Fabo of Fitch, a rating agency. The markets remain nervous: bank shares are down by 36% since the start of the year.

The banks are largely innocent bystanders in the endless back and forth between the Greek government and its creditors, but they are guilty of procrastination when it comes to their NPLs. Instead of restructuring the loans worth saving, calling the bluff of defaulters that could probably pay, and reclaiming and selling the collateral of the hopeless cases, they are counting on a return to growth to rescue delinquent borrowers. That, in turn, is impeding the flow of capital to ventures that might help revive the economy. Yannis Stournaras, the head of the central bank, recently demanded “bold and innovative initiatives” to clean up bad loans. “This cannot be ensured by the current ‘business as usual’ approach,” he added. 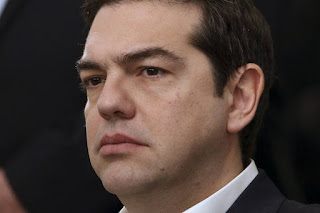 Greece’s bailout inspectors resume talks in Athens on Wednesday to try to unblock the Greek rescue program. The struggle over Greek budget targets, austerity, loans and debt relief is flaring up again at an awkward time. Europe, by effectively shutting down the Balkan migration route, is turning Greece into a big holding pen for refugees and other migrants. Managing that mess will be difficult enough. Nobody wants another crisis over Greek debt and euro membership like in 2015.

Still, the 2016 Greek debt deadlock is potentially explosive even on its own. Here’s why.

Q: Only last summer Greece and the eurozone agreed on a new bailout deal. Now what’s the problem?

A: In July, Europe averted a Greek exit from the euro but didn’t fix the basic problem. Greek bailout plans since 2010 have kept breaking down because they have asked Greece to reach large budget surpluses that have proved beyond the country’s brittle political system. The alternative would have been to target lower surpluses and restructure the nation’s debt. But European creditors, led by Germany, have consistently rejected that alternative.

Now the International Monetary Fund has lost patience. Unlike the euro zone, it didn’t agree on a new loan program with Greece this past summer. The IMF’s insistence that there are only two ways to fix Greece – either via another heavy austerity program centered on pension cuts or with generous debt relief from Europe – is exposing the contradictions in July’s deal.

German Chancellor Angela Merkel needs the IMF to resume lending to Greece. She has always said the IMF’s participation is vital for credibility. And German officials say they won’t ask their parliament, the Bundestag, to release any more euro-zone loans until Greece agrees to a new IMF program.

But the IMF is at loggerheads with both Greece and European institutions, led by European Commission, about what needs to be done.

A solution is needed before July, when Greece would need fresh bailout funds to repay debts. 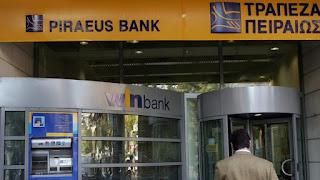 Two of Greece’s biggest lenders are being probed by the eurozone’s banking watchdog in connection with last year’s €14.4bn recapitalisation of the sector, which was as a condition of Greece’s latest international bailout.

Piraeus Bank, the country’s largest lender, and Attica Bank, its fifth-largest, are under scrutiny by the European Central Bank’s single supervisory mechanism in its first audit of Greek financial institutions since it was set up in 2013.

The probe was launched after shareholders in both banks privately voiced concerns over possible irregularities in the latest round of capital raisings, say bankers involved in the procedures.

Two teams of investigators from the SSM are due to arrive in Athens this month.

The SSM supervises Greece’s four systemic banks while the Bank of Greece, the central bank, supervises smaller lenders including Attica. 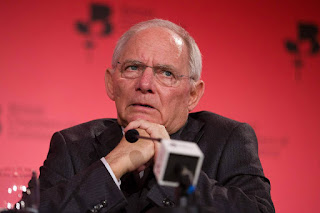 There is no reason to take decisions now on how to ease Greece’s debt burden in the near future, Germany’s finance minister said Tuesday in another sign of disagreements between Athens’ creditors.

“I don’t have a proper argument for the German lawmaker and the German public…on why this should be the focus of debate now,” Wolfgang Schäuble said following discussions with other European finance ministers.

Under a third bailout deal for Greece reached with the International Monetary Fund last summer, eurozone governments pledged to take steps to ease Greece’s debt after the first review of the new rescue program. Mr. Schäuble said he expects that review to be conclude in April. 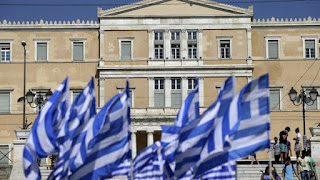 Eurozone finance ministers have moved to break a deadlock between Greece’s warring creditors by sending bailout negotiators back to Athens to agree a new set of economic reforms.

Despite continued disagreement over how long the list of reforms must be, Jeroen Dijsselbloem, the Dutch finance minister who chaired the eurogroup meeting of his 16 counterparts, insisted there was “enough common ground” between the EU and the IMF to restart the negotiations. He said mission chiefs from the bailout monitors could arrive as early as Tuesday.

“More work will have to be done in Athens,” Mr Dijsselbloem said after the Monday evening eurogroup meeting in Brussels. “It’s not going to be easy, we’re very much aware of that.”

Officials acknowledged that the IMF and the EU had not reached an agreement on how thorough the reforms must be, essentially putting off a final fight over the future of Greece’s third, €86bn rescue for at least another month.

The IMF has hinted it is willing to walk away from the bailout if it deems the reforms inadequate, a move that would plunge Greece back into economic uncertainty. Without the IMF, a German-led group of creditor countries have said they would be unable to secure parliamentary approval for their participation in the EU’s rescue, potentially scuppering the deal.

“An interim solution without the IMF would be very difficult for a number of countries, including my own,” Alex Stubb, the Finnish finance minister, said.

The Cost of Isolating Greece 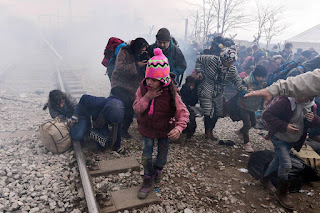 Austria and nine Balkan countries met in Vienna last week to consider ways migrants from war-torn Middle Eastern countries could be prevented from traveling north into Europe through Greece. It’s just the latest in a series of unilateral moves across Europe, which add up to the abandonment of the search for a pan-European solution to the current migration problem.

Gone are any attempts at an equitable distribution of burdens. In its place are proposals to isolate Greece, potentially trapping hundreds of thousands of migrants in an already economically battered country.

Greece has long borne the brunt of illegal immigration into Europe. In 2009, on the eve of the sovereign-debt crisis, 75% of all illegal border crossings into the European Union came through Greece. By 2010, that portion rose to 90%. Greek border-control and asylum-management policy were in a shambles.