Schaeuble Hints Germany May Be Ready to Give Greece Some Leeway 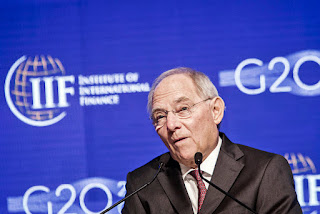 German Finance Minister Wolfgang Schaeuble hinted his country is willing to allow Greece some leeway as it struggles with the twins tasks of reforming the economy and caring for an influx of refugees.

“The financial situation is difficult,” Schaeuble told reporters at a Group of 20 briefing in Shanghai. “Greece is in the situation that it is receiving a lot of solidarity from Germany but not from all the others.”

Tensions over the handling of the region’s refugee crisis escalated on Friday as Greece denied an Austrian request for talks and the European Union’s top immigration official warned the deepening discord risks disaster. The divisions are widening ahead of an extraordinary summit of the EU’s 28 leaders on March 7 called to take stock of efforts to secure the bloc’s external frontiers and mitigate the influx of migrants.

“We are strongly fighting to combine the European tasks,” Schaeuble said of the refugee crisis and economic reforms in Greece. “Both come together.”