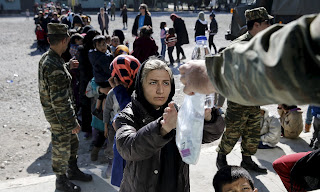 In Victoria Square, Athens, home to an ever-growing number of migrants, a dubious night-time economy has emerged. On Saturday, as a large, middle-aged man walked his small dog, an Afghan boy pointed him out to his new friend, Abdul Waris. “He is one of them who comes here at night,” said the boy. Abdul’s eyes widened. “It’s OK. They don’t want underage – they take the young men who will go willingly to their homes and give them a shower and €10 or €15 for sex. Some go, the ones who have no money left.”

That developing trade is possible because, in a piazza now synonymous with the migrant crisis overwhelming Greece, and where two Pakistani men hanged themselves from a tree on Thursday, many are running out of money.

There are more than 25,000 refugees and migrants stuck in Greece, police sources have told the Observer. The borders leading out have closed down one by one, leaving the country in danger of becoming what the Greek prime minister, Alexis Tsipras, described last week as a “warehouse of souls”.