Closing the Balkan Route: Will Greece Become a Refugee Bottleneck? 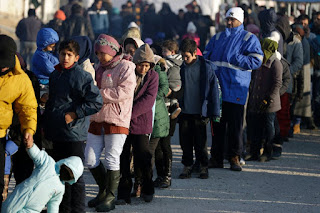 At five o'clock in the morning last Tuesday: Macedonia has once again closed its border, and just a few hours later, chaos reigns. Eighty buses with 4,000 refugees have been stopped by the Greek police 20 kilometers from the frontier and they are now waiting in a gas-station parking lot. Bus drivers argue, refugees jostle on the overfilled lot and overwhelmed police officers yell orders. "Macedonia, Macedonia," the people waiting scream, "open the border!"

But today, the border remains closed to most people. And if it were up to Brussels and the Germans, it would remain that way -- that is, to anyone not from Syria, Iraq or Afghanistan. Since mid-November, Macedonia has tightened its border controls and whoever isn't from one these three countries is turned away. Now, many people's dreams of Europe come to an end here, in Idomene.

For it has recently become clear that Turkey is both unable and unwilling to stop the flow of refugees. As a result, the EU is placing its bets on Macedonia, with a plan that has the support of European Commission President Jean-Claude Juncker.