On an unremarkable morning on Stournari street in downtown Athens, just a few blocks away from the epicenter of every riot the city has seen during its recent crisis years, two men of Asian origin politely and openly hawk cigarettes to passersby.

The illegal packs of R.G.D.-branded smokes cost 1.50 euros ($1.70) each, less than half the price of 20 Marlboros or Prince at one of Greece’s ubiquitous street kiosks.

As Prime Minister Alexis Tsipras walks another tightrope between creditor demands for additional belt tightening and a social backlash, the scene exposes an unhealthy truth: Greeks could smoke, drink and gamble their way out of their next financial hole, if only they were taxed on all of it.

“Illicit cigarette and bulk tobacco trade strips the Greek state from significant revenue each year that could be used for paying pensions, salaries, and social benefits,” said Iakovos Kargarotos, vice-president of Philip Morris International’s affiliate in Greece, Papastratos AVES. “It creates a big public revenue hole that taxpayers have to fill.” 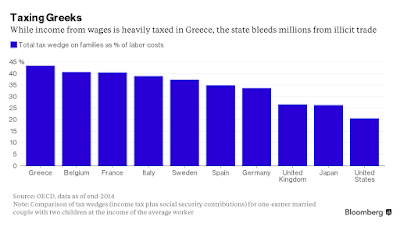 More
Posted by Yulie Foka-Kavalieraki at 8:21 AM