Next Up for Greece: How to Shrink the Debt 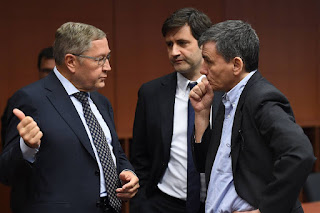 Greece’s creditors are expected to start talking soon over an issue that has been looming over the eurozone since 2010: cutting the country’s mountainous debt burden.

Greece already sliced its debts to private lenders through a bond swap in 2012. But that wasn’t enough. Now, most of its debt is owed to other eurozone governments, which have conceded Athens needs more relief.

The debt talks won’t begin until after still-difficult negotiations over steps Greece must take, including pension changes and budget cuts, to complete the first review of its latest bailout package for up to €86 billion ($93.4 billion) agreed to last year.

Jeroen Dijsselbloem, the Dutchman who presides over meetings of eurozone finance ministers, said Thursday that once there is agreement on that, “then we will start political debates on debt sustainability.”

But while the creditors—the eurozone and the International Monetary Fund—broadly agree on how they could go about cutting Athens’ debt, they will likely lock horns over how much relief the country will need.