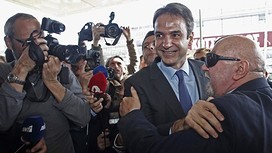 For almost a decade Kyriakos Mitsotakis languished on the backbenches of the Greek parliament, sidelined by his own conservative New Democracy party even when it held power.

His background as the reformist son of a former prime minister, equipped with degrees from Harvard and Stanford universities and experience as a consultant with McKinsey, counted for little with the old-fashioned grandees running the party.

Yet his moment has arrived. To the surprise of many conservatives, including some of his 300 campaign volunteers, the 47-year-old pulled off an unlikely victory in Sunday’s run-off election for leadership of the floundering opposition to prime minister Alexis Tsipras and his leftwing Syriza party.

Evangelos Meimarakis, the folksy former speaker of parliament who led by an 11-point margin after the first round of voting by grass roots New Democracy, supporters was so taken aback by the results that he failed to concede defeat for several hours after the election outcome had become clear.