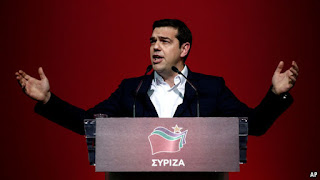 On January 24th Alexis Tsipras, Greece’s prime minister, gave a rousing speech to his supporters in a stadium in Athens, marking the first year in power of his far-left, anti-austerity Syriza party. He vowed to come down hard on his party’s enemies, and blamed the Greek people’s continuing misery on the opposition. Meanwhile Greece’s public broadcaster, ERT, aired a six-minute retrospective on Syriza’s first year, featuring gauzy shots of Mr Tsipras and a voice-over proclaiming that his government had battled elites, delivered social justice, fixed the economy and made Greece an international symbol of dignity. Even leftists rolled their eyes at the heavy-handed propaganda. But if Mr Tsipras’s speech and video were intended to boost morale, they backfired.

Many Greeks were infuriated that the prime minister’s speech failed to mention the refugee crisis, reinforcing a growing feeling that Mr Tsipras is out of touch. His party has been weakened by corruption scandals. George Stathakis, the economy minister, is being probed by a parliamentary committee for failing to include 38 properties and €1.8m ($1.9m) in his 2011 declaration of assets. Earlier this month, the Greek press alleged that Syriza MPs and officials had appointed family and friends to senior public-sector jobs. The government is moving to privatise ports, airports and other public assets: measures that, while economically sensible, are deeply unpopular. Taxes are rising, and unemployment remains at 25% (and near 50% for those aged 18-24). Capital controls, including a measure limiting bank withdrawals to €420 a week, are still in place.