EU Slows Down on Greece Support as Compliance Trumps Urgency

“Everyone got used to the fact the reviews take longer,” Lithuanian Finance Minister Rimantas Sadzius said in an interview on Friday. “Everyone’s prepared to demand that agreements are implemented at 100 percent.” 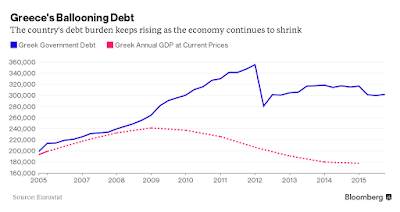 Greece may get 4 billion euros ($4.3 billion) or more once the nation’s creditors complete a review of the most recent bailout, according to a euro-area official who asked not to be named because talks are ongoing. If Greece fails to unlock more funding it may face a cash crunch by the middle of the year.

More
Posted by Yulie Foka-Kavalieraki at 10:56 AM