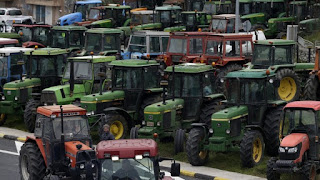 Alexis Tsipras has fended off attacks from Kyriakos Mitsotakis, Greece’s newly elected opposition leader, by insisting that his Syriza government can rescue the country’s underfunded pension system without cutting benefits to retirees.

The prime minister and his rival went head-to-head on Tuesday night in a heated parliamentary debate, their first confrontation since Mr Mitsotakis, a pro-European reformer, was voted in to lead the centre-right New Democracy party this month.

“There will be no reductions in main pensions,” a defiant Mr Tsipras said. “One pension is a whole household’s income in the present [recessionary] circumstances.”

Syriza has resisted pressure from creditors — the EU and IMF — to impose hefty pension cuts by March. The move, postponed from last year, has become an urgent priority with bailout monitors due to return to Athens next week to assessing progress on the reforms agreed in return for a €86bn third international bailout.

Taking aim at Mr Mitsotakis, the son of a former conservative premier, Mr Tsipras asserted that state pension funds were poised to collapse because of “sustained looting” over decades by previous governments.

More
Posted by Yulie Foka-Kavalieraki at 12:56 AM