The Greek right, in search of a leader 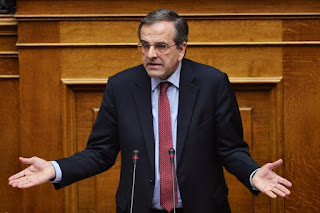 It was a study in contrasting political styles. As the center-right New Democracy party’s leadership race enters the final stretch, this writer attended rallies by Kyriakos Mitsotakis, the Harvard- and Stanford-educated scion of one of Greece’s great political dynasties, and Adonis Georgiadis, the book salesman and TV personality who has moved from the right-wing fringes to the position of standard-bearer of unapologetic conservatism. The first round of voting takes place December 20, with a majority required for an outright victory. Also in the running are Evangelos Meimarakis, the old party hand who served as interim leader between July and November, and Apostolos Tzitzikostas, the young regional governor of Central Macedonia.

In the municipal council hall of Kallithea, a suburb of Athens just south of the city center, after a warm introduction from the reformist-minded mayor, Mitsotakis delivered a polished, confident half-hour performance, without notes, emphasizing the reasons why he is the man the Greek center-right needs to recover its mojo.

He told the assembled crowd of close to 200 people, mostly middle-aged or older, that they would not only be voting for a party leader — “You will also be voting for the next prime minister of the country.” He admitted that in the past New Democracy, having “caught the populist bug,” had strayed from its liberal ideals, and he talked up his record as minister of public administration reform under Antonis Samaras — a grueling 18-month stint during which he took some important first steps toward bringing order and meritocracy to the chaos of the Greek public sector.

More
Posted by Yulie Foka-Kavalieraki at 11:44 AM