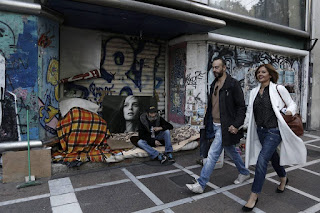 Greek lawmakers approved Tuesday a new set of economic overhauls the government must implement to receive a €1 billion ($1.1 billion) slice of its bailout financing.

In the country’s 300-seat legislature, 153 lawmakers backed the reforms, while 138 opposed and nine abstained. The measures were backed by all of the parliamentarians belonging to the ruling left-wing Syriza party and its junior coalition partner, the right-wing Independent Greeks.

Senior officials from eurozone finance ministries are expected to give the go-ahead on Wednesday for the disbursement of the aid tranche from Greece’s third bailout loan, reaching up to €86 billion.

The measures include overhauls to the banking sector, the design of a privatization fund and the partial privatization of the power grid operator ADMIE.

The grid operator will be split off from the power utility Public Power Corp. The state will retain a majority 51% stake, while 20% will be sold to a strategic private investor and the remaining 29% will be privatized, under Greece’s agreement with lenders.