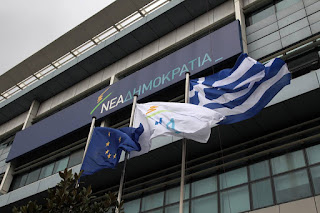 With Prime Minister Alexis Tsipras running aground in his efforts to implement Greece’s latest bailout program, conditions seem ideal in the country for the return of a pro-European center-right party. The Syriza leader’s popularity is falling fast. This summer’s poisonous division over the bailout has subsided. A party that espouses free-market principles and a government meritocracy might find voters once again receptive to its ideas. But as the recent implosion of the New Democracy leadership contest painfully showed, it’s far from clear that such a party in Greece exists.

Nov. 22 was supposed to be the day New Democracy, Greece’s center-right official opposition, held the first round of elections to pick its new leader. It was supposed to be something like an open primary: Anyone willing to pay a €3 fee could register and choose among the four candidates who, back in October, had collected the necessary 50 signatures from party insiders. Instead, the date will now be remembered as a red-letter day in the annals of Greek conservatism.

To start, the technology company hired to run the election proved risibly unequal to the task. It failed to detect and fix the glitches in the electronic system that was designed to register voters and tabulate results. On election day, it quickly became clear that the system couldn’t guarantee the integrity of the proceedings. The vote was suspended, but not before many New Democracy supporters had already made their way to the polls.