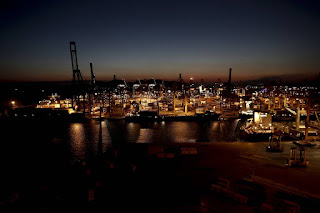 The long-delayed privatization of Greece’s main port of Piraeus is moving forward, with three of the world’s biggest port operators expected to submit their binding bids next week, the head of the country’s​privatization department said Thursday.

​Greece’s leftist government had pushed the move back for a year, upsetting potential investors and ​the country’s international creditors. The creditors had made the selling of state assets a condition for a multibillion euro bailout package to keep​Greece from defaulting on its debts.

“We understand the frustration caused by the delays, but we are now moving forward full speed,” Stergios Pitsiorlas, the head of Hellenic Republic Asset Development Fund, which manages privatizations, told The Wall Street Journal. “All the offer documents are with the potential investors and the deadline for binding bids is on Monday. From there on, the bids will be evaluated and the deal will be completed.”

The deal involves bids for a 67.7% stake in​ Piraeus Port Authority SA . A 51% slice will be transferred to the winning bidder at once and the remaining 16.7% over the next five years as required infrastructure investments at the port take shape.