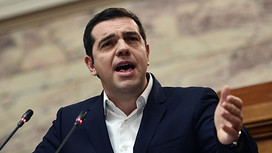 Greek prime minister Alexis Tsipras is pushing for the International Monetary Fund to stay out of the country’s €86bn third bailout, leaving the eurozone to take full responsibility for overseeing economic reforms.

Mr Tsipras said in an interview with the Financial Times he was “puzzled by the unconstructive attitude of the fund on fiscal and financial issues”. He indicated that the IMF should leave his country’s third bailout to the eurozone when it decides whether to stay involved early next year.

“We think that after six years of managing in extraordinary crisis, Europe now has the institutional capacity to deal successfully with intra-European issues.”

Mr Tsipras’s assertion is likely to anger the German government, which has always insisted the IMF stay on board. Berlin values the fund’s technical expertise as much as it doubts the European Commission’s resolve.

Mr Tsipras also risks alienating the IMF, which is a strong advocate of debt relief for Athens while Germany and other eurozone members are strongly against debt writedowns, although he praised the fund’s support on this issue.