Pelagidis & Mitsopoulos, "Who's to Blame for Greece? Austerity in Charge of Saving a Broken Economy" 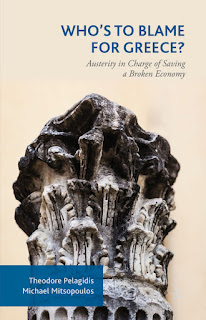 The Euro constitutes the crowning achievement of a prolonged process of integration between European states. It incarnates the vision for a united and prosperous Europe: the attainment of major political goals through the promotion of closer economic cooperation. However, the 2009 crisis brought the EU head-to-head again with its perennial threat – the short-term interests of member states. Greece's economy symbolizes in many ways the Euro area's economic problems and divergent interests as it amasses most of the economic disadvantages characterizing the Euro area's economy itself.

After almost five years since inception of the crisis, Greece's economy today is in the headlines again – this time for the so-called political risk. This book discusses the economic and political challenges to Greece and the EU member states.

Posted by Yulie Foka-Kavalieraki at 7:32 PM