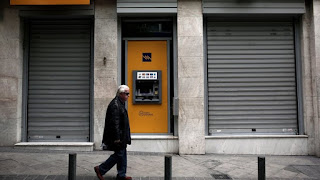 Piraeus Bank used to be a lifeline for small entrepreneurs such as Evgenia, a 33-year-old Athenian who received a loan from the neighbourhood branch to finance her start-up selling fresh flowers.

“Other banks didn’t want to know me,” she says, declining to give her surname. “Even when the crisis came and I couldn’t make interest payments they [Piraeus] still cut me some slack.”

A reluctance to pursue distressed borrowers is one reason why Piraeus is judged to be the most precarious among Greece’s four top lenders, according to the European Central Bank’s latest health check of the sector.

As Greece’s biggest bank, shoring up the finances of Piraeus, and those of its peers, will be crucial in kick-starting lending to the country’s economy, helping it to climb out of a brutal recession that has shrunk the economy by almost a quarter since 2009.

The bank’s dire straits has revived debate about the aggressive expansion strategy pursued by Michalis Sallas, Piraeus’s long-serving chairman, at the height of the Greek crisis.