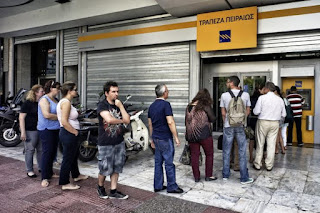 The four leading banks in Greece are expected Friday to lay out their plan for recapitalization, less than four months after the debt-stricken nation's financial institutions reopened following a near-collapse in July. The long-awaited recapitalization process, however, which is likely to include a mix of private investment and bailout money from eurozone lenders, is not an instant solution for average citizens suffering under continued debt.

Greater liquidity and more stability in the long term will follow from the recapitalization, according to economists, as the short-term outlook for average Greeks remains bleak. Average Greek citizens and local businesses will continue to live under strict capital controls, such as account withdrawal limits, as growth in the cash-strapped country stalls and faith in the ruling government wanes.

“The growth issue is a big question mark,” said Marco Vicenzino, director of the Global Strategy Project, a geopolitical risk and international business advisory firm. Vicenzino described Greek citizens worrying about how recapitalization will affect daily activities, such as whether families can provide necessities or if small businesses will be able to pay their employees. Many Greeks are not optimistic, according to Vicenzino: “Most people don’t see the light at the end of the tunnel.”