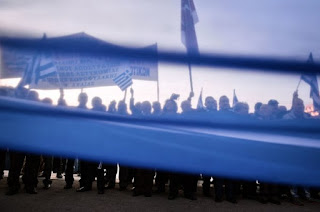 Greece on Friday presented an optimistic budget for 2016, predicting a recession milder than expected in previous forecasts.

The government also said that final numbers for 2015 would indicate the economy will have been flat for the full year, rather than the deep contraction of 2.3 percent that had been expected. One reason is that the capital controls the government imposed on banks over the summer were less damaging to the Greek economy than had been feared.

And next year, the government said, the economy will shrink by only 0.7 percent as it continues carrying out cost cuts required by its 86-billion-euro, or $92 billion, international bailout package. As recently as last month, the government had predicted an economic contraction of 1.3 percent in 2016.

The new assessment came as the finance minister, Euclid Tsakalotos, on Friday presented the budget to Parliament, which is to vote on the package early next month.

“The Greek economy endured, disproving disaster scenarios,” according to a statement by the finance ministry that accompanied the budget.