Greece Comes to a Standstill as Unions Turn Against Tsipras 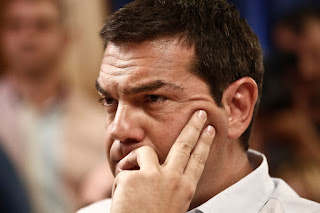 As Greek workers took to the streets in protest on Thursday, Alexis Tsipras was for the first time on the other side of the divide.

Unions -- a key support base for the prime minister’s Syriza party -- chanted in rallies held in Athens the same slogans Tsipras once used against opponents. Doctors and pharmacists joined port workers, civil servants and Athens metro staff in Greece’s first general strike since he took office in January, bringing the country to a standstill for 24 hours.

Greece’s biggest unions, ADEDY and GSEE, are holding marches accusing Tsipras of bowing to creditors and imposing measures that “perpetuate the dark ages for workers,” as the country’s statistical agency released data showing that 1.18 million Greeks, or 24.6 percent of the workforce, remained unemployed in August.

The 41-year-old Greek premier, who was among anti-austerity protesters in previous general strikes, is now racing to complete negotiations with creditors on belt-tightening in exchange for the disbursement of 10 billion euros ($10.7 billion) to be injected into banks. Failure to reach an accord with euro-area member states and the International Monetary Fund on policies including primary residence foreclosures, and stricter rules on overdue taxes, would put the solvency of the country’s lenders in doubt.