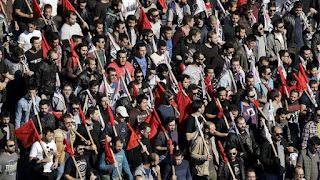 Thousands of public sector employees, pensioners and jobless workers shouted anti-austerity slogans as they marched to the Greek parliament in Athens, giving voice to a growing mood of despondency over looming foreclosures on family homes and further pension cuts agreed with creditors under Greece’s €86bn third bailout.

Riot police clashed briefly with a group of protesters throwing petrol bombs and stones in the square outside the parliament building. Three people were detained, according to police.

Some protesters held pink balloons labelled “Alexis’ promises” — harking back to the bold threats made while he was in opposition by Alexis Tsipras, prime minister, to roll back bailout reforms and default on repaying Greece’s public debt.

“We are resuming the struggle to reverse the bailout measures and win debt writedowns,” declared a large banner held up by members of Adedy, the civil servants union, the country’s largest labour organisation.