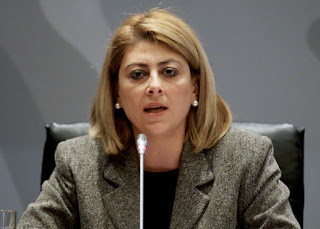 The Greek government decided Thursday to fire the head of the General Secretariat for Public Revenue, in a move that critics are slamming as old-school clientelism, which could create tensions in the country’s relations with its official creditors.

The office in question, the top position in Greece’s beleaguered tax administration, was created in 2012 by the Antonis Samaras government under intense pressure from the troika, with the express purpose of restricting political involvement in the collection of taxes and the auditing of businesses and individuals. The forced resignation of its first head, Haris Theoharis, now an MP for Potami, in June 2014 constituted a blow to Samaras’ relationship with Greece’s creditors from which he never recovered.

Now the same treatment is being meted out to Theoharis’s successor, Katerina Savvaidou, a feisty former PwC tax lawyer, only 16 months into a supposedly fixed five-year term.

More
Posted by Yulie Foka-Kavalieraki at 11:47 AM