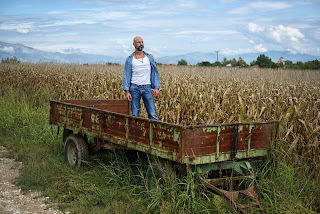 In a stone cottage beside his pomegranate fields here in northern Greece, Christos Gontias, 46, is chain smoking and trying to give an interview. But his cellphone is ringing so incessantly, often with requests from news outlets and farmers joining his most recent call for a nationwide protest, that he rarely has time to finish his thought.

He readily admits that he likes all the attention. But there is far more to it than that, he says. He believes his way of life is on the line.

“I’m in love with the land,” said Mr. Gontias, a farmer and a union leader, glancing out the window. “By that I mean I love putting seeds in the ground and watching them grow, and knowing that I am providing a healthy product. And I am willing to fight for the ability to keep doing that.”

These days, he is fighting the terms of Greece’s latest bailout by its international lenders, which calls for sharp rises in the taxes farmers must pay and in their pension contributions, and he has been bringing hundreds of farmers with him into the streets. Using tactics reminiscent of French farmers’, they have repeatedly parked their tractors in central intersections and even outside polling stations during the elections last month.