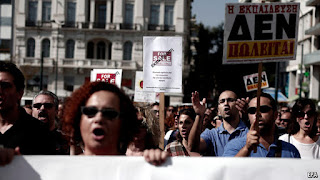 Before Greece’s snap elections in September, the outgoing left-wing government laid out plans for a value-added tax of 23% on private education. The measure, dreamed up by the governing Syriza party as an alternative to raising tax on beef, featured in their manifesto as a blow against plutocracy. It looked like a double win that would simultaneously please creditors and demonstrate the government’s commitment to helping the underprivileged. Unsurprisingly, it did neither.

Some of the country’s reasonably priced private schools were forced to close, leaving staff jobless. Elsewhere, fees rose. Those affected were not just rich families. Greece has more than 300 full-time private schools, attended by about 6% of school-age children, many of whom come from middle- and lower-income families. With tuition fees as low as €2,500 ($2,750) a year, some operate in working-class areas and attract parents who are keen to give their children a leg up.

Those whose parents were unable to pay higher fees moved into the already overwhelmed state system. At the beginning of term in September, Greek schools were short of some 12,000 teachers, according to the ministry of education. Some predict the shortfall will soon exceed 20,000.