Alexis Tsipras pledges to steer Greece back to growth 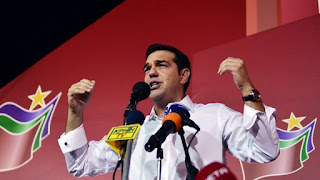 Alexis Tsipras has pledged to steer Greece back to economic growth in the second half of next year but said he would try to negotiate softer terms with the country’s creditors on energy liberalisation and social policies.

The Greek premier won an unexpectedly solid victory in a snap election held last month. In his first big policy speech since his election, Mr Tsipras said in parliament on Monday night that debt relief would be a priority for the new Syriza-led government after it legislates a new €4.3bn package of fiscal and structural reforms in the coming weeks.

In contrast with the fiery anti-austerity rhetoric of his first days in office last January, a subdued Mr Tsipras said he was “fully aware the new (bailout) agreement has difficult points . . . VAT increases, tax hikes for farmers and changes in the pension system, all these will create problems”.

But he vowed to “do everything we can to find alternatives or ways of moderating the negative consequences (of reforms)”.