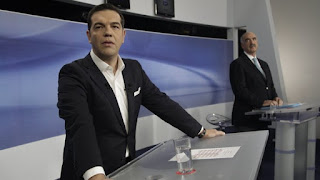 The leaders of Greece’s two biggest political parties traded accusations of incompetence and corruption in a heated television debate on Monday evening, but neither politician emerged as a clear winner, according to local pundits.

Alexis Tsipras, the former prime minister, repeatedly put his conservative opponent Evangelos Meimarakis on the defensive, attacking the centre-right New Democracy party as responsible for “40 years of financial scandals while in power” that had benefited the country’s business and political elite.

Mr Meimarakis countered that Mr Tsipras’ Syriza-led government had managed to bankrupt Greece in just seven months — which led a smiling Mr Tsipras to reply that this was like “someone who drank three bottles of whisky and a shot of vodka then claiming it was the vodka that had given him a hangover”.

The debate was seen as critical for parties to rally undecided votes ahead of the September 20 election. The most recent polls show little to choose between Syriza and New Democracy, at about 26 per cent of the vote each, with the high number of undecided voters likely to be pivotal.