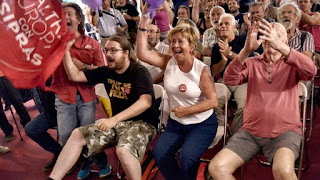 Optimists will maintain that the election result puts Greece in a much healthier place than it was in January. After an election in that month, Alexis Tsipras and his radical leftist Syriza party stormed to power on a platform of uncompromising resistance to the diet of austerity and reform prescribed since May 2010 by Greece’s creditors.

A confrontation rapidly unfolded between Syriza and the creditors that inflicted grave damage on the Greek economy and left the nation’s eurozone membership hanging by a thread.

Now, however — so the optimists’ argument goes — it appears that Syriza will be back in power, not only shorn of its most extreme leftist elements but committed to implementing a reform programme that Mr Tsipras accepted in July as the price for preserving Greece’s place in Europe’s 19-nation currency union.