Once Unthinkable, Economists Now Say Debt Relief for Greece Is a Given

What a difference two months make.

Back in July, things looked so bad for Greece that 71 percent of 31 economists polled by Bloomberg could see the country out of the euro by the end of 2016. Debt relief was a pipe dream for the EU's most indebted nation.

Fast forward to September, a similar survey shows that 94 percent of respondents think it's not only possible, but very likely. The sample of 36 economists was interviewed Sept. 4-11. 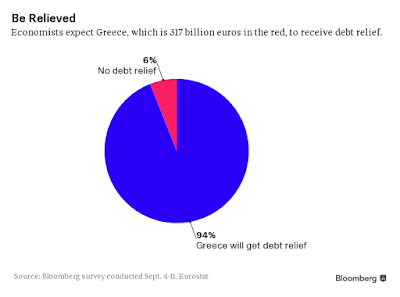 Debt relief — resisted for so long by Germany, the biggest contributor to the Greek bailouts — had been a loaded topic in months of brinkmanship between Greece and its creditors.

More
Posted by Yulie Foka-Kavalieraki at 9:56 AM