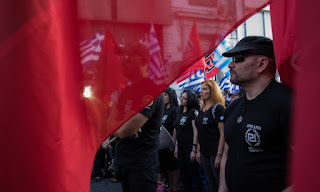 Golden Dawn, one of Europe’s most violent far-right parties, has emerged as one of the biggest winners of Sunday’s general election in Greece, consolidating its presence in parliament and power on the streets.

The neo-fascist group came in third with 7% of the vote, behind the triumphant leftwing Syriza and conservative New Democracy. The result was met with abhorrence and dismay. In April most of its leaders were put on trial on charges of running a criminal organisation masquerading as a political force. The party – which has denied the charges – stands accused of murder, armed attacks, money laundering and trafficking.

“Golden Dawn is a movement of power, it is not a protest movement any more,” the party’s Swastika- tattooed spokesman, Ilias Kasidiaris, told Star TV as it became clear that the extremists had retained their position as the country’s third biggest political force. “Golden Dawn is the only party seeing an increase in its percentage. In October when Greeks begin to experience the consequences of the memorandum and illegal immigration you will see our support increase radically,” said the former marine, berating the country’s mainstream media for boycotting the party.

More
Posted by Yulie Foka-Kavalieraki at 12:53 AM