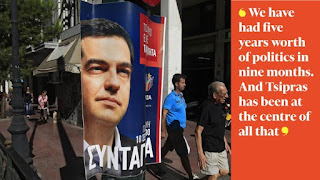 Not for the first time this summer, Alexis Tsipras was found wanting. It was Monday’s pre-election debate, the last before Greeks go to the polls on Sunday, and his opponent speculated that the cameras had been positioned to give the former prime minister an extra inch of height.

“How come I am looking shorter?” quipped Evangelos Meimarakis. “Or has he got taller?"

The joke struck a nerve: For Mr Tsipras, who only a few months ago seemed destined to dominate Greek politics for the next decade, suddenly appears diminished.

The former communist who tamed Syriza’s dozen competing factions and brought the party to power almost single-handedly in January at the forefront of a surging leftwing populist movement in Europe, is now running neck-and-neck with Mr Meimarakis, a lightly regarded leader of the conservative New Democracy party.

As Sunday’s ballot approaches, Greece’s fifth general election in six years, Mr Tsipras finds himself struggling to rally fatigued and disenchanted supporters who are questioning his leadership as never before.