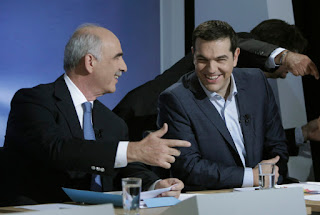 Greece’s long-anticipated campaign TV debate — the first between party leaders since September 2009, before the age of the bailouts — proved a mighty perverse affair.

Tight constraints on questions, follow-ups, who could speak to whom and for how long, were as frustrating for the seven candidates as for the journalists who participated on Wednesday night. And while the latter were well within their rights in voicing frustration with the droning, unenlightening three-hour affair, the former were not: Their staff had foisted the mind-numbing format on the viewing public. Of course, that didn’t stop politicians from complaining about it.

Despite all the cussedness, five key themes emerged from this stunted, uninspiring campaign.