Greek Voters Have a Choice, But Not Much of One 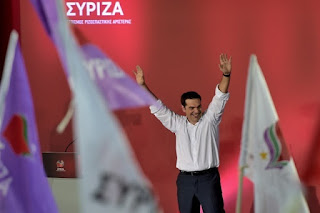 Greece is having an important election on Sunday, and nobody seems to care. Last night I went to a rally here in Athens for New Democracy, the center-right party that has, somewhat unexpectedly, pulled even with Syriza in the polls. As appropriate for a center-right party, the street was filled with neatly dressed people waving enormous Greek flags.

Well, I say "filled," but from where I was standing, the crowd seemed to fit into one largish street, with a little spillover onto the next block. There in the back, no one looked much interested in the proceedings; they smoked, greeted each other, occasionally gave an interview to the roving TV crews. But for the flags, they could as easily have been at a block party as a political event. The Syriza rally Friday was decidedly bigger, and somewhat more enthusiastic, but considering that Athens is the country’s major population center, and they are going to the polls on Sunday, it was also much smaller and more subdued than I’d expected.

No one I’ve asked has exhibited any notable enthusiasm for the upcoming vote; some of them hadn’t even decided whether they were going to bother casting a ballot, or if so, who they would be voting for. People seem weary of elections, which are starting to resemble the weather in San Francisco: if you don’t like what you got, just wait fifteen minutes for the next one.

More
Posted by Yulie Foka-Kavalieraki at 12:16 AM