Greek Election Scenarios: the Good, the Bad, and the Ugly

Greece’s election remains too close to call as a three-week campaign wraps up on Friday with no clear front-runner in a vote that may put Europe’s most indebted state on course for thorny coalition talks as of next week.

Opinion polls show Alexis Tsipras’s Syriza party and Evangelos Meimarakis’s conservative New Democracy party running neck and neck ahead of Sunday’s vote. With a fragmented parliament and no apparent winner, Greece risks being dragged into difficult coalition talks that could delay the implementation of measures required by creditors in exchange for emergency loans, including for the recapitalization of banks. That’s a delay Greece can ill afford.

“Greece has to act fast after the election,” said Holger Schmieding, chief economist at Berenberg Bank in London. “Fast progress is essential to gradually rebuild the trust in government and confidence in the future that is needed for some of the capital outflows to be reversed and for the slump in investment to end.” 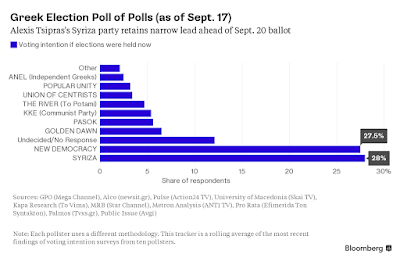 Posted by Yulie Foka-Kavalieraki at 6:05 AM