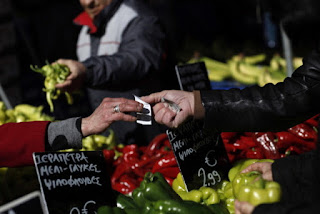 Every place is full of metaphors that beckon the unwary foreign journalist. America’s huge cars are a metaphor for our people: brash, rich, more than a little heedless of our effect on the rest of the world. Before Britain got rich again, the dilapidated buildings were a metaphor for the decline of empire. French baked goods were a metaphor for everything liberal Americans imagined was better there.

Athens right now is full of such metaphors, except that it’s hard to know what makes for a good symbol, and what you’re taking too far.

Thursday in Kolonaki Square, I came across a pile of cushions and clothes inside a little park area roofed over with vines, suggesting that someone was sleeping there. Metaphor, random pile of discarded junk, or signs that Athens, just like my hometown of Washington, has homeless people who sleep on the streets?