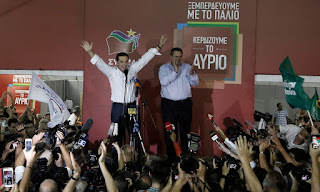 Greece’s leftwing leader Alexis Tsipras has emerged triumphant from a snap general election after securing a dramatic victory over his conservative rival, despite a turbulent first term in office.

There had been predictions that the race was too close to call after he accepted a crushing eurozone-led austerity programme during his first term in office, but the charismatic leader looked set to be returned to power with a near repeat of the stunning win that catapulted his Syriza party into office in January.

With 99.5% of votes counted, Syriza had claimed 35.5% of the vote, easily seeing off the main conservative challengers New Democracy on 28.1%.

The interior ministry said that gave Syriza 145 seats in the 300-seat parliament, just four fewer than when Tsipras first stormed to power early this year.

Speaking in Athens, Tsipras declared: “This victory belongs to the people and those who dream of a better tomorrow and we’ll achieve it with hard work.”

More
Posted by Yulie Foka-Kavalieraki at 9:44 AM