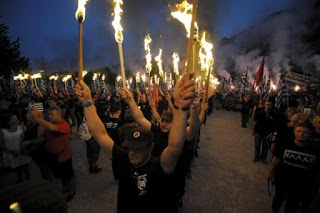 Standing before them, a member of the European Parliament from Golden Dawn, the euro zone's most extreme right-wing political party, roused the crowd with defiant denunciations of enemies at home and abroad ahead of a national election on Sept. 20.

"The message of Leonidas - Molon Labe (Come and get it) - is as timely today as ever for everything tormenting Greece," the retired lieutenant general, Eleftherios Synadinos, told supporters waving flags bearing the party's Swastika-like emblem.

"We're not like everyone else with heads bowed down. We're upright, we're standing and the message will be delivered on Sept. 20 ... We must not surrender arms. We must not back down," he said, to which the crowd roared: "People! Army! Nationalism!"