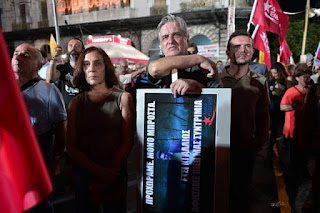 It wasn't so long ago that Alexis Tsipras was describing the International Monetary Fund as "criminal" and demanding that Germany pay war reparations to Greece. That he is now Europe's favored candidate for prime minister of Greece is a paradox that should reassure no one.

Whoever wins Sunday's parliamentary elections in Greece, the result will be unsatisfying unless both Greek and European leaders can get with a simple, straightforward program: No more muddling though. Either Greeks accept the painful reforms necessary to keep the country in the euro -- or they reject them, return to their currency and take full control of their economy.

That's not the choice Greeks will face this weekend. Tsipras and the leader of the establishment New Democracy Party, Evangelos Meimarakis, both offer qualified support for the bailout, and seem eager to change the subject. In a televised debate Monday night, the two men quarreled over which had the more feckless record.

More
Posted by Yulie Foka-Kavalieraki at 11:20 AM