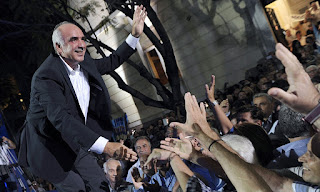 The stage is being set for one of the most exciting elections in recent Greek history with polls showing the former ruling leftwing party, Syriza, running neck and neck with the centre-right New Democracy party barely two weeks before the snap ballot.

Alexis Tsipras’s surprise move to tighten his grip on power, with what he had hoped would be a fresh mandate to implement spending cuts and reforms, is now showing all the signs of having backfired. Diehard leftists, appalled by the anti-austerity movement’s spectacular U-turn, appear to be leaving Syriza in droves.

“It is going to be a thriller, and that means that when the day comes no result can be excluded,” Aristides Hatzis, a professor of law and economics and prominent political commentator, told the Guardian. “More than 60% of the undecided are Syriza voters. They feel disappointed, disillusioned and betrayed.”

Two opinion surveys published on Sunday depicted Syriza and New Democracy locked in a dead heat – a far cry from the walk in the park Tsipras envisaged when he called the vote days after signing up to the onerous terms of a third, €86bn (£63bn) rescue programme for the debt-stricken country.