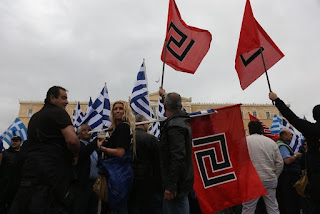 Today marks the second anniversary of the murder of antifascist rapper Pavlos Fyssas by Golden Dawn member George Roupakias. The killing was the catalyst that led to the arrest of many of the extreme right organization's members. Along with Fyssas's murder case, several other charges were also mounted against the organization.

Subsequently various members of the parliamentary group were jailed and set to face trial in a process that should have begun in April. However, thanks to endless bureaucratic delays a witness has yet to be called.

Until recently, the official line of GD leader Nikos Michaloliakos—who stands accused of directing a criminal organization—was that his party had nothing to do with the murder of Pavlos Fyssas. In 2013, Michaloliakos claimed that George Roupakias wasn't even a member of Golden Dawn and that he had no involvement in the murder.

On Thursday, September 17, just a few days before Greeks are called to the polls for a third time in one year and with Golden Dawn polling as the third most popular party, Nikos Michaloliakos accepted political responsibility for the murder of Pavlos Fyssas on live radio.