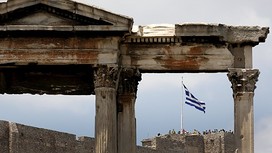 In Anthony Burgess’s dystopian novel A Clockwork Orange, written in the invented language “Nadsat,” the degenerate hooligan Alex ultimately resolves to settle down. “Tomorrow is all like sweet flowers and the turning vonny earth,” wrote Burgess, “and your old droog Alex all on his oddy knocky seeking like a mate.” Burgess’s US publisher thought this ending too happy, and axed the final chapter.

I have come to the conclusion that Burgess was right and his publisher wrong. Most delinquent youths do eventually grow up, usually without the brutal aversion therapy inflicted on Alex. The same may be said of countries.

Take Greece, which for a century and a half after regaining its independence in 1830 had a dire political record marked by three top-level assassinations, two uprisings, the depositions of three kings, three coups d’état, five military conflicts, occupation by the Nazis and subsequent civil war. The remarkable thing about the current Greek crisis is not that it involves a financial default, which is the Greek norm; what is remarkable is how narrow the range of political outcomes is, compared with what it would have been in the past.