Greek lenders fell to their lowest levels since at least 1995, sending the nation’s stocks lower for a second day. 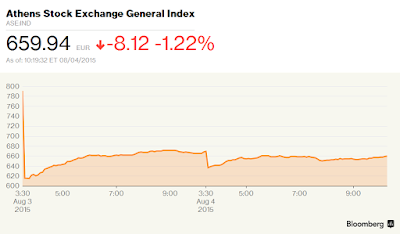 The benchmark ASE Index lost 1.2 percent to 659.94 at the close of trading in Athens, paring a retreat of as much as 4.9 percent. It closed at its lowest level since September 2012. The gauge tumbled the most since at least 1987 on Monday, after the exchange reopened following a five-week shutdown.