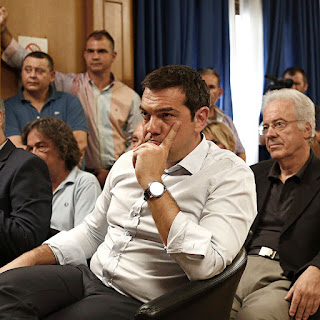 Rarely has a prime minister overseen so much financial destruction in so little time while tightening his grip on power.

After winning an election on a wave of populism in January, Greece’s Alexis Tsipras finds himself running a country in a state of economic emergency. His government rations money to the parts of society that need it most; bank stocks have collapsed more than 60 percent in three days; and some officials fret that Greece is still one accident away from leaving the euro.

And yet, Tsipras’s popularity remains unchallenged. While his critics say no one deserves more blame for playing a game of brinkmanship that he could never win, polls show his Coalition of the Radical Left, or Syriza, has as much as twice the support of its nearest rival.

One senior aide said his shift toward the center of the political spectrum makes him the only guarantor of stability ahead of another possible election in coming months.

“The only way he can survive politically is to move to the center-left, and the only moment he could do this is this very moment,” said Aristides Hatzis, professor of law and economics at the University of Athens. “Tsipras has to move forward to hold elections, come into collision with his party, escape the image of the ‘good kid’ and become a national leader.”