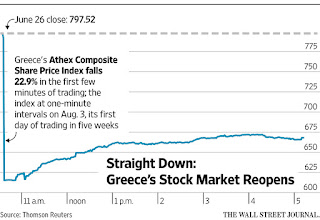 The steep decline shows investors are still concerned about Greece, even though the country and its creditors appear to have made some progress in recent bailout negotiations.

The benchmark Athex Composite fell more than 20% within minutes of the market opening. It later pared some of those losses but still ended the session down more than 16%, representing its biggest fall in percentage terms since at least January 1991, according to Thomson Reuters data.

In more bad news for Greece, a closely watched measure of manufacturing output Monday showed how deeply the crisis has affected the country’s economy.