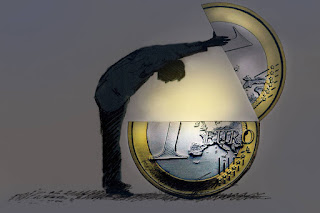 The crash in the Greek stock market when it reopened Aug. 3 reminds us that Greece’s economy and financial system are still in awful shape. Greek banks—whose stocks have been pummeled this week—reopened on July 20 with the help of the European Central Bank. But many restrictions, including those on cash withdrawals and international money transfers, remain. Greece suffered a run on its banks, closing them on June 29. Payments froze and the economy was paralyzed.

If Detroit, Puerto Rico or even Illinois defaults on its debts, there is no run on the banks. Why? Because nobody dreams that defaulting U.S. states or cities must secede from the dollar zone and invent a new currency. Also, U.S. state and city governments cannot force state or local banks to lend them money, and cannot grab or redenominate deposits. Americans can easily put money in federally chartered, nationally diversified banks that are immune from state and local government defaults.

More
Posted by Aristides N. Hatzis at 8:08 AM