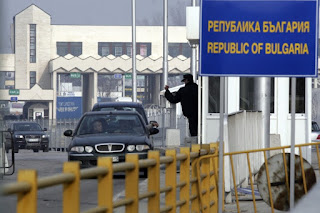 The Greek-Bulgarian border is a bleak sight. A concrete slab of roof stretches across four lanes — two going into Bulgaria and two coming out. Beneath it sit several border control booths checking a line of slowly moving vehicles, mostly trucks, as they enter and leave Greece.

The drive here through northern Greece has been eye-catching. The Belles Mountains to my left and the Orvilos on my right, coming in from Bulgaria along with the river Strimonos, have made for a varied background of rolling green landscape and water: Hills smothered in thick foliage; fields of sunflowers and corn; houses covered in traditional red slate roofing (to protect against the damp, heat and cold); and, at various points along the road, boxes with crucifixes and candles — set up to remember those that have died in traffic accidents. It’s northern Greece at its most winsome.

Everything, though, ends in the concrete monotony of the border. It was once where Greece — and thereby NATO — met the Eastern Bloc’s Iron Curtain and its Warsaw Pact. But since 2007 Bulgaria has been a fellow EU state. Here on the border, where the two countries collide, the “old EU” meets one of its newest members. But not everything has changed. Greece is in crisis, but Bulgaria is still poorer — its GDP under half that of Greece. It remains far, far cheaper. And this difference, I will soon discover, is having a profound effect on this region of Crisis Greece. I have taken Alexis, a local man, along with me for the ride to find out exactly how.