Greece Ends One Crisis and Braces for the Next 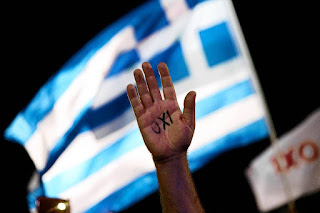 Who would have thought, as the results of Greece’s referendum on July 5 were coming in, that five weeks later we would be here? The Greek people responded to what was then the most recent offer from creditors with a resounding “no,” as they had been urged to by Prime Minister Alexis Tsipras. He promised that a “no” vote would strengthen his negotiating position and wouldn’t threaten Greece’s membership in the euro.

Things turned out very differently. Mr. Tsipras’s referendum success inspired other eurozone leaders to support German Finance Minister Wolfgang Schäuble’s proposal for a Greek “time out” from the euro. Confronted with this threat, Mr. Tsipras capitulated to demands that in some cases were more stringent than those that Greek voters had rejected days earlier.

Less than a month later, with surprisingly little fuss, the two sides have reached an agreement on a third bailout. Taking into account the Greek economy’s relapse into recession, the fiscal targets for 2015-17 have been weakened. The goal is to achieve a primary deficit (before debt-service costs) of 0.25% of gross domestic product this year and a primary surplus of 0.5% of GDP next year, rising to 1.5% in 2017. This is far off the targets of 3% in 2015 and 4.5% in 2016-17 under the previous deal.